A village has about 200 families. As usual, some of these families are rich, while some others are poor and middle class. The number of people in each family also varies greatly. Due to this, there are 2-3 families which may still be middle-class even though if you consider the total income of such families then they may be among the top ones in the villages.

The total income of the family “A” is the 5th highest in the village, but it is still a middle-class family due to the fact that it is a large family, thereby meaning that the income per person may be comparatively less. Its total annual income is ₹ 26,11,012.

Unfortunately, one day, there is some accident in this family which causes a temporary distress to one of the family members. Other family members try to help the distressed family member.

Now, there is another family “B” which has the 30th rank in the village from the point of view of total family income. Its total income, though, is only about ₹ 3,77,435 per annum.

It hurts the head of the family “A” that it has the 5th highest income in the village, and yet it should accept free help or free alms from some other family (especially from a family which has 30th rank in the village from the income point of view). For that matter, the family “A” does not want to accept alms or free help even from the richest family in the village. It is a question of its self-esteem. In any case, the financial distress caused to one of its family members is not such huge that it cannot be taken care of.

Now, consider that the said village is the “world”. Substitute India for family “A” and UAE for family “B”. The above numbers (of income) represent their GDPs in million dollar terms, and the ranks mentioned above represent their GDP ranks in the world (India is expected to have already become the 5th largest economy in the world, though a formal announcement may take some time since statistics gets changed after some time-gap).[1]

For last about 15-20 years, it has been the consistent policy of the Indian Government to decline foreign aid. We don’t want to present India to be a country that receives alms from other countries or as a country that cannot take care of itself.

Tomorrow, if there is a natural calamity in China or Japan, and if India wants to offer some ₹ 1000 crore as free aid, will they accept it?

Look at how media in other countries uses sarcastic language about aid being given to India. For example, Daily and Sunday Express of UK has this headline: “Foreign aid FARCE: Now ‘wealthy’ India sent £279MILLION a year of YOUR cash”. It says that:[2]

“Ministers have repeatedly been criticised for giving taxpayers’ cash to India given that the country has a space programme and nuclear weapons as well has having one of the fastest-growing economies in the world in recent years.”

Or, see another news report, as per which a then British Minister (called “Secretary” in UK) is reportedly saying that too much of Britain’s foreign aid budget is being “stolen or wasted on inappropriate projects”; she was “infuriated” by the apparent squandering of taxpayers’ money that is meant to be spent on helping the world’s poorest people; India is shown as the 10th highest recipient of the British bilateral aid in this news report.[3]

So, being a nuclear-state and having sent space vehicles to Mars and Moon, and having become 5th largest economy in the world, do we still want to accept alms or free aid from other countries for a natural calamity?

Does it help our reputation as an important nation in the comity of nations? Look at how people in other countries scoff at us for squandering their tax-payers’ money.

Do we want this insult at this stage of our civilisation? Do we not want to develop any self-respect?

Kerala floods are, no doubt, one of the biggest natural tragedies. The economic loss has been put at about ₹ 21,000 crore to the nation.

But, do you know that the Jat agitation in Haryana in early 2016 resulted in loss of ₹ 34,000 crore to the nation?[4] A large number of people were affected adversely then too. Huge economic losses have been caused during agitations of Gurjars, Patidars, Marathas, SC & ST Bharat Bandh, etc., too. Please pardon me for saying all this – my intention is not to underestimate the gravity of situation on ground or to hurt the feelings of anyone. The purpose of this comparison is not to compare the two types of tragedies, but just to highlight that we as a nation are capable of taking care of economic losses.

But, did we take any foreign aid to recover from those situations? In fact, no such aid was even offered from outside.

Even during the 2004 Indian Ocean tsunami, which was a much bigger disaster with thousands of people having died, the then Prime Minister Manmohan Singh had politely refused to take any foreign financial aid. Likewise, after the 2013 Uttarakhand floods, in which thousands of people had died, India did not take any foreign aid. After the 2014 Kashmir floods also, no foreign aid was accepted by India.

Therefore, for last 15-20 years, it has been a consistent policy that India has itself done the rebuilding and rehabilitation work after various disasters.

How do you expect India to suddenly reverse its policy on accepting foreign aid to take care of natural calamities? Is India not capable of handling the situation? Fortunately, governments in India and people in India have come to help their Kerala brothers and sisters in the hour of need.

True, there are many political parties and people with vested interests, who will create unnecessary controversies on the amount of aid given or not given. But, the fact remains that India stands united in relief and rehabilitation work in Kerala.

So, I don’t see anything wrong in the Government of India politely refusing to accept any foreign aid for taking care of Kerala floods.

Kerala flood is India’s problem. And, we the Indians, can deal with it unitedly.

And, I genuinely hope what the Centre has given is only the interim relief, and not the final one.

Update (23 August 2018): I don’t belong to any political party. However, I don’t think I am estopped from putting the statistics of central help given at the time of various grave natural calamities in past several years, including for the recent Kerala floods, to put the things in correct perspective, leaving the rest to the esteemed readers to form their opinion. 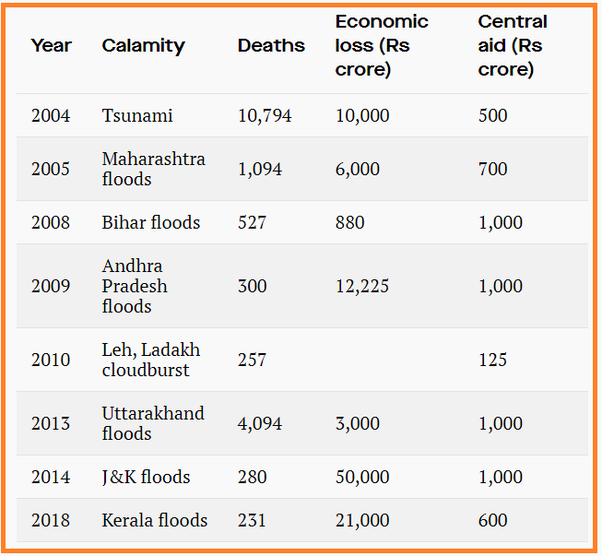 Here are some interesting facts for you. Take a look

SSC TECH 53 MEN AND WOMEN dates are out. Check your Centre and select dates Now…..

An interesting incident when BalGangadhar Tilak And Sai Baba met